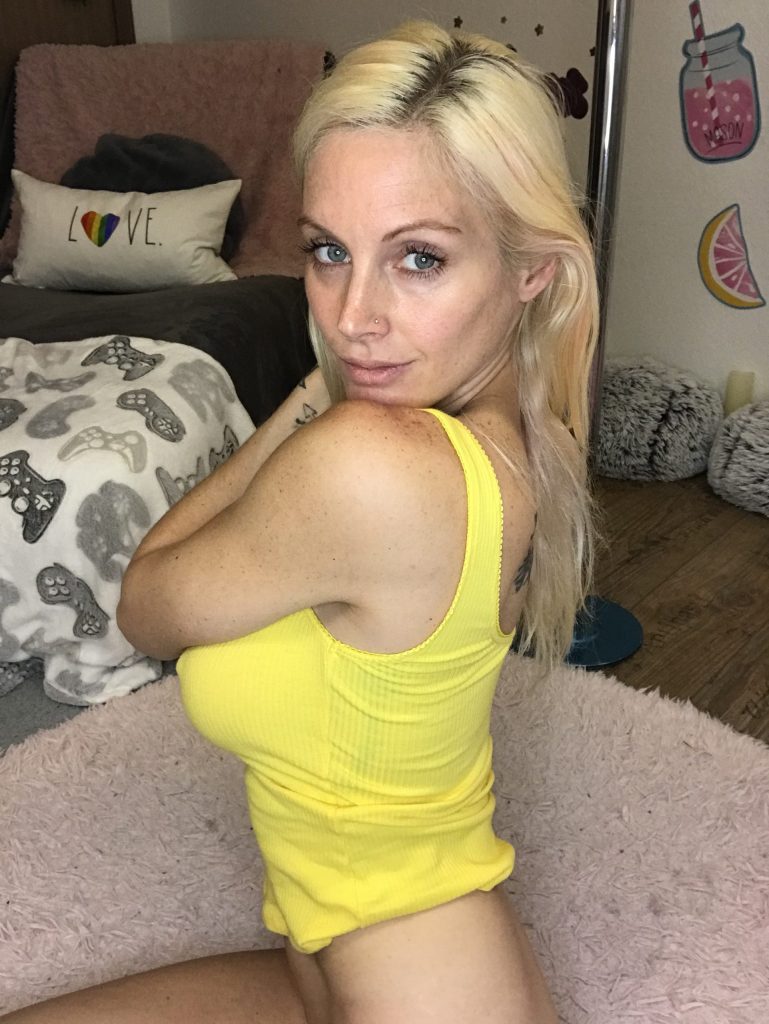 Danni G is currently age 41 – and has been working in the adult industry since she was 25! She’s originally from a “small redneck town in the south east part of Ohio,” but she moved to Cleveland shortly after becoming a Hustler Honey – so, “Cleveland is ‘home’ but I am currently living in Colorado” she quipped.

Danni started out in the industry via the club scene.

“I started out as a stripper and then got into feature dancing,” she explained to YNOT Cam. “For about five years straight, I traveled and worked grand openings for different Deja Clubs. I have even been published in Hustler magazine.”

Social and economic shifts in the world at large impacted Danni’s career path though – as they do to everyone in every industry!

“The stock market crash affected the strip club scene, and I don’t think it really ever truly recovered,” she said.

It was during this time that Danni got ready for her next chapter and got into the bar/restaurant industry. “It was still fast-paced and dealing with people, but I didn’t have to show ‘em my tits!” she enthused.

Danni went on to manage bars and nightclubs and even a fastfood place for a bit, but she missed the club scene.

“I eventually went back as a server at the same club I danced at and worked my way up to manager, which was by far the most stressful job I have ever had,” she said. “I have literally done every single job at a strip club, and I like that I can say that.”

“Fun fact,” she added, “I never dated a customer in the club. Never. It was my rule, and I stuck by it. However, I always managed to fall for the floorhosts that worked at the clubs and that always caused drama — I do not recommend  doing this!”

Danni G took some time out to share her experiences moving through different occupations in sex work – from clubs to online work today!

YNOT Cam: After all your work in clubs, what finally prompted you to move your career online?

Danni G: Eventually I did leave the club scene and got into sales and started doing fitness stuff on the side. I wasn’t a fan of the corporate world and decided to pursue the fitness route as a career. I ran a gym and a yoga studio for awhile, but eventually I got the bug to go out on my own.

I attempted it while I was still living in Cleveland, and I soon learned that Cleveland is not a great place to sustain during the winter months as a trainer. I needed extra income and fast! I had a girlfriend who did camming way back in the day, and I started looking into it.

So, at the age of 38, I realized that my actual career path had always been the adult biz. I made the decision to embrace the fact that I am a full time adult entertainer, and I’m proud of what I do!

My first year webcamming was on My Free Cams, and then I went to Chaturbate. Currently, I’m on both, but I only cam on MFC like maybe once per month. I’m on Chaturbate weekly.

What are some of the best things — and challenges — that happen when working online?

Working online is very close to working the club, except you have no direct contact. For example, when you are in an open chat, it’s like being on stage. It’s your commercial.

For me, online is easier than direct contact because I am Autistic. It is easier for me to chat with dudes without worrying about social cues. One of my biggest challenges is finding the balance and not getting burnt out! Working at a club, you leave the club and that’s it. You go home and leave it all there. But online, you’re home already and I find myself working all of the time!

Though it does has its own challenges, I love working from home and being my own boss.

You’re a Sexual Educator and Counselor — Can you tell us a bit about your qualifications and services in that realm?

So, to be an educator on something one must have knowledge, experience and a willingness to be open enough to educate others. I check all of those boxes. I have been doing my own research since my club days on Sex Ed — or, the lack of it — talking to all walks of life, asking questions, making observations and writing theories.

We literally have a lack of sexual education, and we need to do better! It’s a passion. I was raised in a very religious upbringing, and sex was considered bad and not talked about. Thank god for someone like Sue Johanson who educated others on such a taboo topic.

My long term goal is to change — or to at least, be a part of changing — our current sexual educational curriculum. I feel this is where we are going wrong in today’s society. Sex is everywhere, but no one is truly taught about it. Instead, we have a bunch of people with a lack of education on their own bodies, and we don’t know how to cope. So, my streams are to entertain, educate and enlighten. I use my art to entertain, so when we are all being educated, we leave feeling more enlightened.

How do health issues like Autism impact your work online?

Autism Spectrum Disorder (ASD) is a developmental disability that can cause significant social, communication and behavioral challenges. I was misdiagnosed when I was younger as “just” having a mild case of OCD, and my mom was told I would grow out of it. I never did.

I have struggled my whole life and literally would cry because I felt so stupid at times. Due to COVID forcing us to change our daily routines and such, I started to struggle even more. It was my daughter who actually brought it up and suggested I listen to a streamer who talks about living with ASD as an adult. It was like a million light bulbs turned on! Someone was literally explaining what goes on inside my head. So, I am currently only self-diagnosed, but I’m in the process of getting a medical diagnosis as well.

Working online has been very helpful actually though! I can do my job without seeing the person on the other side of the cam. I also have time to read their typed responses and can better understand them that way.

The struggles in general with being in the biz and having ASD? I don’t get jokes or sarcasm, so I have always had dudes tell me I was dumb for not getting the joke. Sometimes I cannot handle touch, and dudes get all offended. I have a hard time with facial expressions and end up making weird ones myself and that can make everyone feel uncomfortable. I ramble on about certain subjects. I am very direct when I speak, and people think I’m a bitch when I’m not trying to be! I can’t make eye contact when chatting, and it makes people think I’m not listening.

When I work online and I don’t have to try and read faces and social cues, I am more relaxed and I feel I produce better content that way.

You have an address listed in your Twitter bio… What’s that about?

I was getting asked for an address so fans could send me stuff. I get all sorts of fun stuff, plus it’s nice to have a return address for biz stuff that isn’t personal. I personally believe everyone should have a PO box!

I keep snapping pics with my eyes closed pic.twitter.com/oNteoGfYQX

Outside of work, what are you most passionate about?

Something that I am passionate about and get involved with outside of my career is working with the homeless. When I was still in Cleveland, I was working with Homeless Hookup Cleveland, which is a non-profit that hands out hygiene packets to the homeless while waiting to get into the shelters.

We have a major issue with homelessness in this country, especially when the average age is twelve! This can lead to those feeling they have no choice but to do “survival” work, so during my free time, I will head to the areas where I know the homeless are. Sometimes I just go to have conversations, and other times I pass out a meal I cooked and sometimes hygiene packets.

All of the time, I am moved by the amount of happiness one can still possess when they have nothing.

If you could change one thing about today?s world, what would it be and why?

I would change peoples fear of being rejected, so instead of living a fear-based life we could live in a world of peace and harmony.

Erika is a sex positive people watcher (and writer). Email her at erika@ynotcam.com.